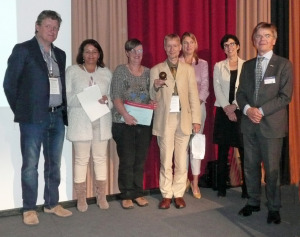 Lithium has been used in psychiatry for over 60 years and is still one of the first-line treatments in bipolar disorder. It is also used as augmentation to antidepressants in treatment resistant depression. Age-dependent changes in lithium pharmacokinetics and pharmacodynamics may influence lithium use patterns in an ageing population. Multimorbidity and polypharmacy could make older patients more vulnerable to the adverse effects of lithium. The main objectives of this thesis were to study the treatment patterns and the occurrence of somatic adverse effects of lithium and their possible determinants in older patients.

We compared lithium use patterns between middle-aged and elderly outpatients in the Netherlands. Older patients were less likely to receive add-on of psychopharmacologic drugs next to ongoing lithium therapy and lithium was not more often discontinued and not more often switched in older than in middle-aged patients.

A case description with lithium intoxication illustrated the importance of monitoring and of recognising (prodromal) symptoms of intoxication.

A retrospective study was conducted to ascertain if age was a determinant of instability of the serum lithium concentration (SLC) using SLC from the laboratories of three hospitals in the Netherlands. In this study age was not found to be a determinant of SLC instability.
To determine the effect of long-term lithium therapy on glomerular filtration rate (GFR) and maximum renal concentrating capacity (Umax) in the elderly, we conducted a cross-sectional study with 48 outpatients of 65 years or over. No association was found between duration of lithium use and estimated GFR, but there was a significant association between duration of lithium treatment and decrease in Umax. No other risk factors than duration of lithium therapy were identified. A reduced Umax did not cause significant more thirst, incontinence or disturbed sleep.

We state that a specialized lithium ambulatory clinic for the elderly could improve the quality of care for the older psychiatric patient. Lithium treatment in the elderly can be safe, if the patient is adequately monitored.